The Blessing ceremony is an event of reaffirmation of marriage for already married and faithful couples and newly-wed couples. Around 60 people from Biel, Bern, Ticino, Geneva and Zurich-Aarau attended the event.

Starting at 2 pm, the staff members setting up equipment and decorations for the big event. Not until around 4:45 pm did participants start to stream into the hall with wonder etched on their faces. At around 5 pm, MCs Noëmie Komagata and Roger Fankhauser started the ceremony off by inviting some youth to do some musical performances. Nathalie Komagata and Julia Handschin gave a piano/song performance and song/dance performance. After their performance, Michael Rawlence, Naomi Aoto and Elisa Ferrete performed three of their own songs for the participants. The songs that were performed were meaningful and fit well with the ceremony's ambiance. 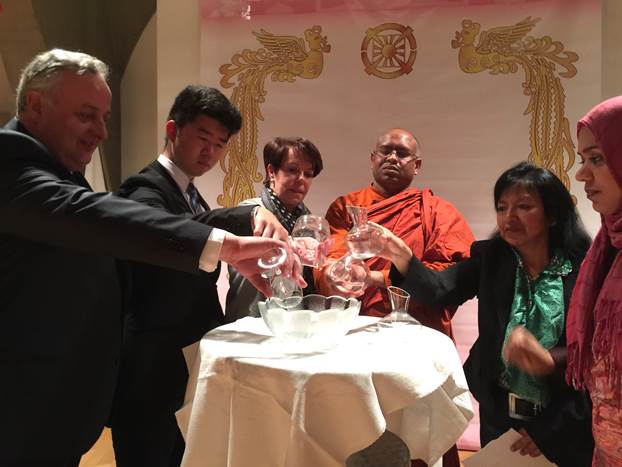 After the water ceremony was over, the Blessing ceremony began with white scarves handed out to every person. Heiner and Carolyn Handschin, Presidents of the Family Federation for World Peace and Unification (FFWPU) in Switzerland, led the process. Every couple stood up as each were handed a cup of holy wine or holy nectar. The meaning behind the holy wine and nectar was for the couples to start anew in their familial and spiritual life. A moment of closeness was shared between the couples as they drank from each other’s cups. This was followed by the ceremony of sprinkling holy water on the participants, reciting the blessing vows and speaking words of benedictions. A group picture was taken with everyone making hand hearts and then dinner was served right outside of the ceremony hall.