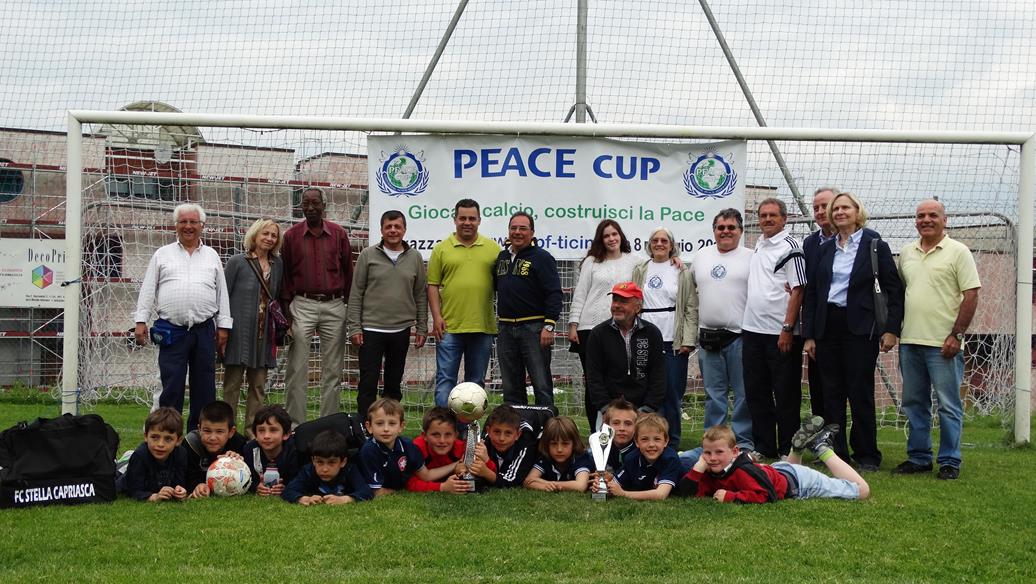 UPF-Ticino, Switzerland: On Sunday, May 8th in the town of Novazzano, the fifth edition of the soccer tournament for children “PEACE CUP” took place in cooperation with the much-appreciated soccer association of Novazzano. From the Italian speaking part of Switzerland and North Italy, there were 12 teams of the category “E”, aged 9-11, participating with the purpose of promoting fair-play. UPF-Ticino wishes to offer schoolchildren a yearly opportunity to play soccer in a friendly environment, by observing and rewarding especially friendship-oriented gestures of behavior during the competition and on the spectators’ seating area. Actually, the best fans receive a trophy for fair support, as well. “The greatest thing is that in this tournament everybody wins something”, a player commented cheerfully at the end of the event. In fact, in addition to the main awards, all the teams received a trophy and also numerous special prizes for exemplary behavior of correct comradeship on the field, observed by the referees and UPF-staff. Even the kitchen-staff were rewarded for having prepared hundreds of delicious meals. The weather was good but the enthusiasm shown by the participants and spectators even better! The proud faces of the children were the proof that in a well-played game it is possible to learn also from one’s own defeat, being pleased with oneself and the others and always smiling. This year for the first time, the tournament was won by Italian players: Cossato was the first-rank champion-team and they received, as well, the award for the best slogan, expressing: “Sometimes you win; always you will learn.”

The main trophy PEACE CUP was given to the team of Stella Capriasca for their behavior of respecting the
motto of the tournament “Play football, build Peace”.

Please watch our reports, videos and pictures in: www.peacecup.upf-ticino.ch