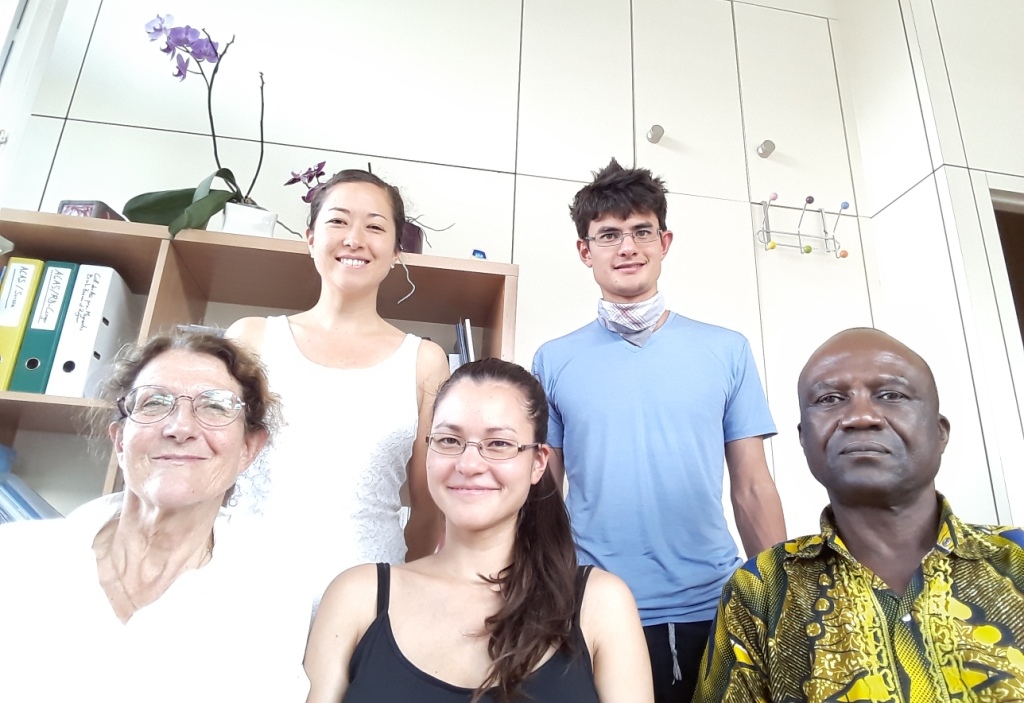 On July 21st 2019, the InterPlus Sharing held in Biel/Bienne talked about the topic “Warnings about Hell” (World Scripture pg. 218).

Rivalry in worldly increase distracts you

Until you visit the graves.

Nay, but you will come to know!

Again, you will come to know!

Would that you knew now with certainty of mind!

For you will behold hell-fire;

Indeed, you will behold it with sure vision.

Then, on that day, you will be asked concerning pleasure.

There was a rich man, who was clothed in purple and fine linen and who feasted sumptuously every day. And at his gate lay a poor man named Lazarus, full of sores, who desired to be fed with what fell from the rich man’s table; moreover the dogs came and licked his sores. The poor man died and was carried by the angels to Abraham’s bosom. The rich man also died and was buried; and in Hades, being in torment, he lifted up his eyes, and saw Abraham far off and Lazarus in his bosom. And he called out, “Father Abraham, have mercy upon me, and send Lazarus to dip the end of his finger in water and cool my tongue; for I am in anguish in this flame.” But Abraham said, “Son, remember that you in your lifetime received your good things, and Lazarus in like manner evil things; but now he is comforted here, and you are in anguish.

And besides all this, between us and you a great chasm has been fixed, in order that those who would pass from here to you may not be able, and none may cross from there to us.”

And he said, “Then I beg you, father, to send him to my father’s house, for I have five brothers, so that he may warn them, lest they also come into this place of torment.” But Abraham said, “They have Moses and the prophets; let them hear them.” And he said, “No, father Abraham; but if some one goes to them from the dead, they will repent.” He said to him, “If they do not hear Moses and the prophets, neither will they be convinced if someone should rise from the dead.”

In the garden of the city of Sieu-Shui-Siuen, there once lived a man by the name of Fan Ki, who led a wicked life. He induced men to stir up quarrels and lawsuits with each other, to seize by violence what did not belong to them, and to dishonor other men’s wives and daughters. When he could not succeed easily in carrying out his evil purposes, he made use of the most odious stratagems.

One day he died suddenly, but came back to life twenty-four hours afterward and bade his wife gather together their relatives and neighbors. When all were assembled he told them that he had seen the king of the dark realm who said to him, “Here the dead receive punishment for their deeds of evil. The living know not the lot that is reserved for them. They must be thrown into a bed of coals whose heat is in proportion to the extent of their crimes and to the harm they have done their fellows.”

The rumor of these occurrences spread afar, and people came from every direction to see the mangled body of the unhappy man. His wife and children were overcome with grief and shame, and closed the door to keep out the curious crowd. But Fan Ki, still living by the ordeal of Yama, said in inarticulate sounds, “I have but executed the commands of the king of hell, who wants my punishment to serve as a warning to others. What right have you to prevent them from seeing me?”

For six days the wicked man rolled upon the ground in the most horrible agonies, and at the end of that time he died.

Treatise on Response and Retribution (Taoism)

People can never escape from hell; [without help] they are trapped there forever. Yet, do you realize that your own mother, father and relatives will likely end up going to hell? You vaguely think that things will somehow work out. However, the reality is that your beloved parents and relatives are headed for hell. In this life, if they should go to prison, wouldn’t you cry out desperately and do whatever it takes to free them? Yet truly, your own children, parents, siblings and kinfolk are bound for an eternal prison from which there is no escape. If you really knew that, wouldn’t you feel desperate to save them?

This means you are not certain whether or not hell truly exists. You might think that it probably exists, but you really do not know what it is like. Now you may be uncertain, but once you die you will know for sure. Then it will be too late. (34:267, September 13, 1970)

What would happen if God were to bring all believers to heaven, even though they were ignorant of heaven’s laws and [had not prepared themselves to fit with] the structure of the ideal realm? They would face difficulties living there. (390:260, August 13, 2002)

God’s mind has room to accommodate everyone; He wants to welcome every human being to live within His mind. But should He open the door to wicked people and permit them to enter His domain? Or should He close the door and keep them out? This is God’s problem.

God abides at the highest place, where everyone wants to enter. However, the mind of God has many levels, with walls or mountains separating them. This is the reality of the spirit world: there are many different levels, each walled off from the next. On one side of the wall is hell; on the other side is heaven. Should the spirit world have walls? Or shouldn’t they exist? What do you think?

In the spirit world, groups of people with the same mindset live together; this creates a wall. It is very difficult to go up to the next higher level, and nearly as hard to go down. Most people cannot even dream of leaving their limited domain. Only the most highly developed spirits can freely travel down to the hells and back. They have the mind of God, who wants to embrace all people.

Yet God’s situation is difficult. The people on His right are good, while the people on His left are bad. Although He wants to embrace good and bad alike, He has no other choice but to separate them. God declares, “Anyone who is greedy and selfish will be placed upside-down.” Don’t you think this will happen to you if you are self-centered and insist on your own way? Self-centered people think nothing of trampling and beating up others as they scramble to reach the top. They would push away the good people and leave them in misery. Therefore, God sets up walls between the different regions of the spirit world, to keep the evil spirits from breaking through. These walls are absolutely necessary. Were evil spirits given freedom and equality with good spirits, they would cause such havoc in heaven that even God would have to escape.

The only way to avoid being blocked by walls in the spirit world is to train yourself during your earthly life. Once you get to the spirit world, it will take tens of thousands of years to climb up each step. (November 4, 1990)

The perfection of man and woman is for the two to abide in love with God as the third—the unity of a man, a woman and God. Yet ever since the Human Fall, not one human being could reach that exalted state of love. Having fallen into a world of darkness, don’t people nevertheless aspire to regain the heights? The goal of true love is extremely high, but in reality the standard of human life is extremely low. Knowing the ideal but recognizing that they live very far from it, people feel heartbreak, emptiness and misery. That is truly hell. (92:197, April 10, 1977)