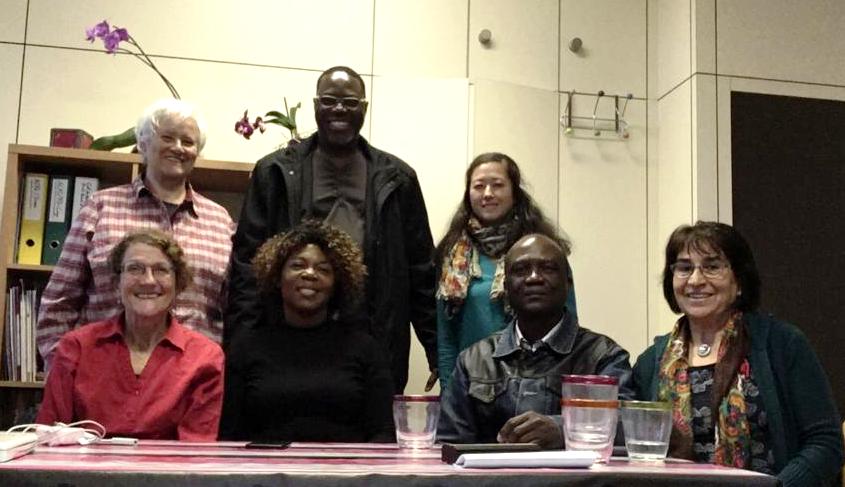 On March 10th and 17th 2019, the InterPlus Sharing held in Biel/Bienne talked about the topic “Death: Transition to a New Life” (World Scripture pg. 181).

The hour of departure has arrived, and we go our ways—I to die, and you to live. Which is better God only knows.

It is We who give life, and make to die, and to Us is the homecoming.

Now my breath and spirit goes to the Immortal, and this body ends in ashes; OM. O Mind! Remember. Remember the deeds. Remember the actions.

Man’s real nature is primarily spiritual life, which weaves its threads of mind to build a cocoon of flesh, encloses its own soul in the cocoon, and, for the first time, the spirit becomes flesh. Understand this clearly: The cocoon is not the silkworm; in the same way, the physical body is not man but merely man’s cocoon. Just as the silkworm will break out of its cocoon and fly free, so, too, will man break out of his body-cocoon and ascend to the spirit world when his time  Since man is life, he will never know death.*

One man believes he is the slayer, another believes he is the slain. Both are ignorant; there is neither slayer nor slain. You were never born; you will never die. You have never changed; you can never change. Unborn, eternal, immutable, immemorial, you do not die when the body dies. Realizing that which is indestructible, eternal, unborn, and unchanging, how can you slay or cause another to be slain?

As a man abandons his worn-out clothes and acquires new ones, so when the body is worn out a new one is acquired by the Self, who lives within.

* The Self—the Atman or all-pervasive Spirit—preexists its incarnation in the physical body, and will continue to exist through eternity, clothed in body after body.

You prefer this life, although the life to come is better and more enduring. All this is written in earlier scriptures; the scriptures of Abraham and Moses.

I inquired of Africanus whether he himself, my father Paulus, and others whom we look upon as dead, were really living. “Yes, truly,” replied he, “they all enjoy life who have escaped from the chains of the body as from a prison. But as to what you call life on earth, that is no more than a form of death. But see, here comes your father Paulus towards you!”*

Onyame* does not die; I will therefore not die.

*‘Onyame’ is the most common Akan name for the Supreme Being. It means, roughly, ‘the One who gives fullness.’

Meet the Fathers, meet Yama, and meet with the fulfillment of wishes in the highest heaven; casting off imperfections, find anew thy dwelling,  and be united with a lustrous body.

For we know that if the earthly tent we live in is destroyed, we have a building from God, a house not made with hands, eternal in the heavens. Here indeed we groan, and long to put on our heavenly dwelling, so that by putting it on we may not be found naked. For while we are still in this tent, we sigh with anxiety; not that we would be unclothed, but that we would be further clothed, so that what is mortal may be swallowed up by life. He who has prepared us for this very thing is God, who has given us the Spirit as a guarantee.

So we are always of good courage; we know that while we are at home in the body we are away from the Lord, for we walk by faith, not by sight. We are of good courage, and we would rather be away from the body and at home with the Lord. For we must all appear before the judgment seat of Christ, so that each one may receive good or evil, according to what he has done in the body.

In the Korean language, the word toraganda means, “to die,” but its literal meaning is, “to return.” To where do we return? Not to the soil of the cemetery. It means to return to the original place of departure, the place of origin. It is a place beyond the origin of history... even the dwelling-place of the Creator. Since we originated from God, we should return to Him.

The universe has natural cycles. The snow covering the mountains melts, flows down through many small valleys into streams and rivers and on into the ocean. Then it evaporates and becomes vapor. Through this circulation, water thus returns to a higher state. Likewise, we want to return to a higher and better place. (299:61, February 4, 1999)

Humans originate from God’s mind, grow up and mature in God’s bosom of love, and make a family on earth which can embrace the whole world with love. Through this process, they will return to God’s bosom of love as mature persons. This is the path of our life. (135:267-68, December 15, 1985)

A human being’s essence is spiritual. When you go to the spirit world you will recognize more deeply that the essence of being human is to live for the sake of others.

Then, why do people deal with everything so selfishly? It is because humans have a blood relationship with Satan, the angel who violated the law of heaven. (2:138, March 17, 1957)

We were born as an eternal life, and therefore go to the spirit world after death. Life there will be on a totally different dimension. In this limited world we cannot move freely, but the other world is a higher dimensional place where we can do anything. You can jump beyond time. With true love, whatever you desire you will receive, anytime and anywhere. The spirit world is boundless.

However, to realize this you must be trained in true love here on earth. You are not yet ready. Without fulfilling your responsibility to prepare yourselves well, you cannot go to the realm of freedom in the spirit world. But once you perfect true love on the earth, you can go there anytime. (216:116, March 9, 1991)