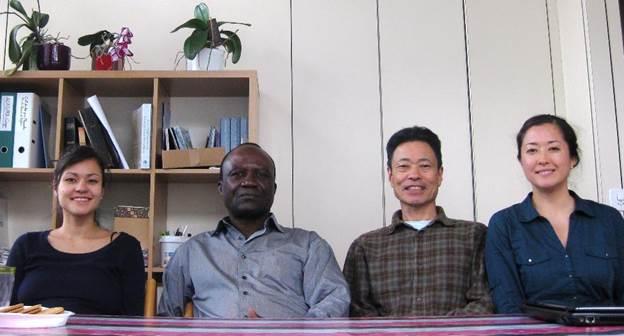 The moral law is to be found everywhere, and yet it is a secret.

The Book of Songs says,

The hawk soars to the heavens above

Fishes dive to the depths below.

That is to say, there is no place in the highest heavens above nor in the deepest waters below where the moral law is not to be found. The moral man finds the moral law beginning in the relation between man and woman; but ending in the vast reaches of the universe.

Doctrine of the Mean 12 (Confucianism)

“The moral law has a great power of creation.”

Law is twofold—natural and written. The natural law is in the heart, the written law on tables. Therefore all are under the law, the natural law, but it does not belong to all men that each should be a law unto himself. However, that man is a law unto himself who does the commandments of the law of his own accord and manifests the work of the law written in his own heart...

Nature herself is the teacher of good conduct. You know that one must not steal, and if your servant has stolen from you, you beat him, while if someone has lusted after your wife, you think he should be punished. Now, what you condemn in others you perpetrate yourself...

“We shouldn’t punish others. We are not better than others, we are hypocrites. We shouldn’t do something to others what we don’t want to get.”

“The laws in a written way is a consensus, the natural laws comes in the heart.”

Doctrine of the Mean 2 (Confucianism)

“The vulgar person has no compassion towards other people.”

The principle of Tao is just as close as what is right in front of our eyes, in our everyday lives, in eating and drinking, and in the maintaining of normal social relationships—between ruler and subject, and father and son, and between brothers, and spouses, and friends.

“The principle of Tao, like the moral laws, should be everywhere.”

“Like in nature, predators eat their preys. If there were no laws in this way, some species would propagate and there would be no balance. Again, when we live for the sake of others, we have to count ourselves in others. We cannot live forgetting ourselves.”

Like it or not, human beings live within a cyclical existence: people grow old and return to their original elements, and new people are born. Through this cycle, humanity develops and increases. All things that exist move and function within their limited realm in accordance with the laws of nature that establish nature’s cycles.

The nine planets of the solar system revolve about the sun. Can a planet say, “I will go where I please”? No, it cannot leave its orbit. When spring comes, can any animal or plant say, “I refuse to grow”? No. Spring is the time to grow. Summer is the time for plants to become thick with foliage and their flowers to bloom. Then in autumn, they must bear fruit.

“Some people want to stay young their whole life but it doesn’t work. The steps of live are made for that. If we understand that the meaning of life and the different steps of live, we can appreciate each moment of life.”

The solar system turns in a great, cosmic circle. What is its center? It is love—true love. Therefore, at home, we are taught to love and honor our parents, an expression of love called filial piety. We are taught to love our nation; that love is called patriotism. We are taught to love humankind; that is to love as a saint. In other words, in the various orbits of our life, love should be at the center. When true love takes the center seat, everything else falls into its proper place. The right order is created around that eternal and unchanging axis.

“It seems obvious but it’s not in our world. True love should have been in the center according to God.”

Just as the laws by which the sun, moon and stars were created—the way of heaven—set up a system of vertical order, so also in the family there is a vertical order extending from grandparents to parents and children, and likewise a horizontal order formed by the siblings. The laws of heaven and the values or norms of [family life] correspond.

“The love for the society is horizontal. The natural law is good if we respect it. Respecting our parents should be natural, as well as for respecting our brothers and sisters.”

In springtime the flowers bloom, in summer the plants grow, and in autumn they bear fruit. Likewise, when you live according to the laws of nature, it is a shortcut to the Kingdom of Heaven.

“Also it’s in developing our hearts that we can enter in the Kingdom of Heaven. The shortcut is to live according to the natural law, the moral laws.”

“If know the natural laws, we can for example have efficient crops, better than when we use the pesticides.”

Human laws today are based on Roman law, and Roman law is the foundation of world culture. However, human morals are based on the conscience. Conscience precedes law.

Goodness is the foundation of conscience. When we deviate from goodness and go astray, our conscience tries to correct us. Our concept of goodness sets the standard for our conscience. Hence, a universal society needs the moral law, because its members seek a social order that is in accord with the untainted conscience. Ultimately, the root of human morals is the heavenly law.

“The conscience has to be developed though. If a child is in a society where nobody follows their consciences then that child will be the same.”

Human morals are rooted in the heart. Relationships in the family, norms of behavior, social systems, the social order and such should be rooted in the heart. Human morals begin from parents loving their children. Then, by children loving their parents, they establish a true human relationship. A second true human relationship is established by a husband loving his wife and a wife loving her husband. Love is like the leaven for morality in all its aspects.

Formulas rooted in laws have made possible the development of our technological civilization. Whether a scientific idea can be accepted as law depends on how widely it can be applied in its field. Likewise, in our religious lives, we should not go by blind faith. God always carries out His Providence through formulaic laws, so we must understand these formulas. There is a clear formula running through the history of the Providence of Restoration from the past up to the present. This is one of the most important teachings of the Unification Principle.

“We should understand with the heart all the moral laws.”

“In the educational system, there are now some classes about respect, about living together, because nowadays many children don’t respect the others or even the teachers. Many parents think they have to let their children free without putting a frame.”