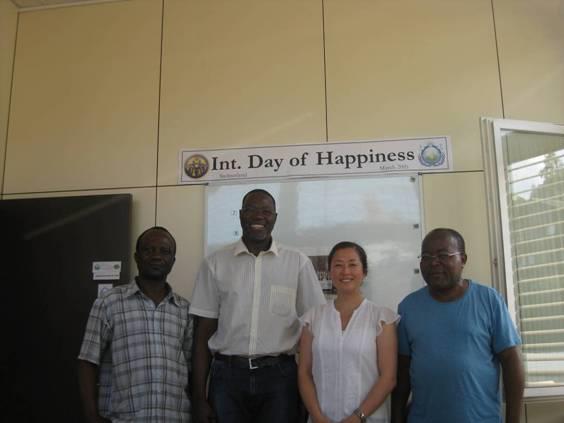 “When Marduk commissioned me to guide the people aright and to direct the land, I established law and justice in the language of the land in order to promote the welfare of the people.” The Code of Hammurabi 15

“For example in the Republic Democratic of Congo, the laws were also translated into the 4 national languages, Swahili, Lingala, Tshiluba and Kikongo.” “It must be difficult for the migrants in Switzerland to understand all the laws here. But on the other side, we say: anybody should know his/her country’s laws, it’s his/her responsibility. And if we don’t, there are still counselors in laws!”

“The Creator… projected that excellent form, Law. This law is the controller of the ruler; therefore, there is nothing higher. So even a weak man hopes to defeat a stronger man through the law, as one does with the help of a king.” Brihadaranyaka Upanishad 1.4.14 (Hinduism)

“There is a difference between understanding the law, interpreting it and putting it into practice, in a good and in a bad way!”

“Laws are partly framed for the sake of good men, in order to instruct them how they might live on friendly terms with one another, and partly for the sake of those who refuse to be instructed, whose spirit cannot be subdued, or softened, or hindered from plunging into evil.” Plato, Laws 9 (Hellenism)

“He who renders true judgments is a co-worker with God.” Mekilta, Exodus 18.13 (Judaism)

“Jesus was a good example of somebody doing God’s will, being a co-worker of God.”

“What are laws? Laws exist to prevent the destruction of things that are worthy of protection. There is a natural law that protects the universe from destruction. Likewise, nations have laws to protect society from destruction. Once we understand the purpose of laws, we can appreciate the importance of obeying them.”
Sun Myung Moon (118:198, June 1, 1982)

“Ideally, parents should teach their children rules and laws with the understanding of the consequences of acts, not just teach them what is good or bad and make them scared of the punishments they would receive if they act in a bad way. Children have to understand the rules with responsibility.”

“Every country has its laws, whose purpose is to maintain goodness. After all, a nation’s constitution and the laws enacted by its legislature function to protect the general welfare, not destroy it. What about people who violate the law? All countries have prisons to punish them. Yet the standards of what is allowed and what is prohibited differ from one country to another according to the system of government and the views of its leaders.” Sun Myung Moon (216:306, April 15, 1991)

“A nation enacts laws to enhance the public way of life. It places restrictions on people who live only to satisfy selfish desires and the desires of the body. The law sets limits on such self-centered activities; the more self-centered they are, the narrower are the limits the law sets.” Sun Myung Moon (105:15-16, July 8, 1979)

“Human laws today are based on Roman laws, and Roman laws are the foundation of world culture. However, human morals are based on the conscience. Conscience precedes law… Society needs laws, because its members seek a social order that is in agreement with the untainted conscience. In the end, where do human laws have their basis? Their basis is in heavenly law.” Sun Myung Moon (33:44, August 2, 1970)

“The conscience would be the natural law and guidance in the ideal world. We wouldn’t need any law in that kind of world! The problem of nowadays is that people’s
consciences are not enough developed or developed in a wrong way.”

“Why should you obey the laws of your nation? You may think, ‘That’s a bad law. I know that some crooked congressman introduced the bill and got it passed, so I’m not going to obey that law. I will follow my own laws.’ Nevertheless, laws are made to preserve the freedom of the nation as a whole, and the nation’s freedom is a higher good than the preferences of particular individuals or groups. From this perspective, it is right to obey the law. By the same token, God’s law protects the freedom and integrity of the entire universe, above and beyond the desires of any of its creatures.” Sun Myung Moon (May 1, 1982)

“In French there is an expression called ‘the sheep of Panurge’ (‘Les moutons de Panurge’), coming from a passage of a work written by the French author François Rabelais. It refers to a flock of sheep drinking at a river. One sheep goes into the river until it was not able to touch the bottom. The other sheep blindly followed that one sheep and they all got drowned. It’s good to reflect and feel with our hearts about anything before just following blindly.”

“At the Human Fall evil started first, ahead of goodness. Hence we must make effort to suppress evil and elevate goodness. What strategy shall we use? First, we must take control over our arrogance. The Fall occurred when human beings exalted themselves and pushed God aside. That was the beginning of Satan’s nature. Arrogance is the desire to elevate oneself without regard to law and discipline or to how it may affect the surrounding environment or the social order. An arrogant person has no regard for duty or law. How do we describe a person who lives in accordance with the law? Do we say He is arrogant? No, we say he or she is as an honest person. The Korean word for honesty (jeongjik) is composed of two Chinese characters, ঢ meaning “right” and જ meaning “straight.” The law establishes what is straight. With the law we separate good from evil and distinguish between right and wrong. An arrogant person ignores the law. We must put a stop to behavior that ignores the law and violates the norms expected according to one’s position and circumstances.” Sun Myung Moon (37:112, December 23, 1970) “What will be the constitution of the Kingdom of Heaven? It will establish the power of love and foster the life force of love. All laws in the Kingdom of Heaven will be for protecting love.” Sun Myung Moon (111:171, February 15, 1981)