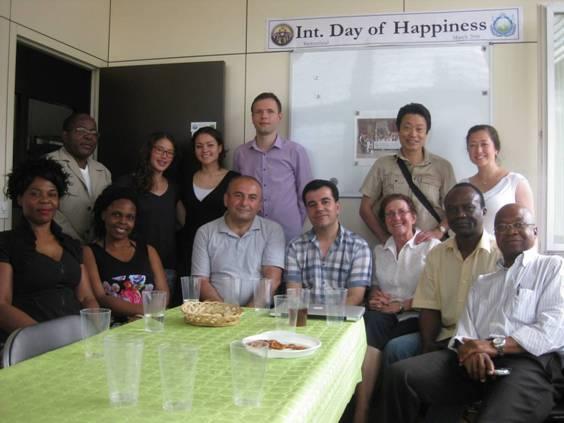 “We hold these truths to be self-evident, that all men are created equal, that they are endowed by their Creator with certain unalienable rights, that among these are Life, Liberty and the pursuit of Happiness. —That to secure these rights, governments are instituted among men, deriving their just powers from the consent of the governed.” U.S. Declaration of Independence (World Scripture pg. 1056)

“This was said already almost 300 years ago but still now, there’s unrighteousness. For example, women don’t have equal values in terms of salary even in some developed countries like Switzerland!”

“I know no safe depository of the ultimate powers of society but the people themselves; and if we think them not enlightened enough to exercise their control with a wholesome discretion, the remedy is not to take it from them, but to inform their discretion by education.” Thomas Jefferson

“Nobody has the full power. We have to inform and educate people so that we have equal values. The new generations have to be taught about power. In Africa for
example, the old generation will never be able to accept that a man is in the kitchen, cooking!”

“The ruler who submits to democratic ideals, His rule is lasting.” Adi Granth, Maru, M.1 (Sikhism)

“Few things help an individual more than to place responsibility on him, and to let him know that you trust him.” Booker T. Washington

“What helps the most is trust and to give responsibility to somebody. The word responsibility comes from “response”, so the person responsible has to be able to give the answer. It’s not the meaning of power.” “During the Soviet Union in Russia, people didn’t kill each other when there was a change. But in Iraq, Yemen or Syria now, many people got killed.”

“In these last days of human history, heavenly law has descended upon the earth in the name of democracy, bringing an end to the long phase of history in which people sought to obtain happiness by seizing property, land and people.” Sun Myung Moon (Exposition of the Divine Principle, Eschatology 2.3)

“From their very origins, the democracies which emerged in England and the United States were different from the democracy born out of the French Revolution… The English and American democracies were founded by sincere Christians, the fruits of the Abel-type view of life, and were born out of their victorious fight with absolutism to win religious freedom. Hence, these are Abel-type democracies.” Sun Myung Moon (Exposition of the Divine Principle, Preparation 3.1)

“The results of democracies depend on faith foundation. The people who govern must be connected to God to be able to govern well.”

“If a black person wanted to run for the presidency, would white Americans support him? What do you think? Would they elect a capable black candidate? …As long as blacks and whites are fighting over their rights, are there truly human rights? The democratic world is a world of individualism. It takes no account of relationships, such as husband and wife. Each individual is his or her own center. Yet in reality, people cannot exist without relationships. Everything exists in the context of relationships. A society that valued relationships above all else would encourage everyone to make relationships with their counterparts, for that is the very nucleus from which the world will become one. First, families become one; then they build relationships with their neighbors and unify their neighborhood. Based upon this principle, people would assemble themselves into a single structure, connecting everyone throughout the world.” Sun Myung Moon (228:8, March 1, 1992)