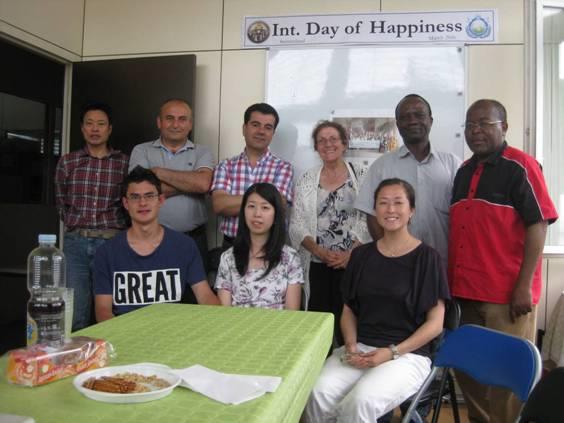 “The government is the guardian of those who have no guardian.” Hadith (Islam) (World Scripture pg. 1054)

“It is the government’s responsibility to take care of the poor people. For example, Switzerland is taking care of Syrian refugees.”

“All those who are weary, disabled, crippled and infirm, who are orphan, childless, widowers, and widows are my brothers who totter and falter with no one to turn to. When the gentleman rules the government he must support such people.” Chu Hsi (Confucianism)

“If the chief has many breasts they are sucked by the people.” Akan Proverb (African Traditional Religion)

“That’s how it should be but what is happening in reality in the world is the other way around! The chief should be sharing the goods with the people.”

“When there is a question of defending the rights of individuals, the poor and the helpless have a claim to especial consideration. Those of the richer class have many ways of shielding themselves, and stand less in need of help from the State; whereas those who are badly off have no resources of their own to fall back upon, and must chiefly depend upon the assistance of the State. And it stands to reason that wage-earners, who are undoubtedly among the weak and necessitous, should be specially cared for and protected by the Government.” Pope Leo XIII, Rerum Novarum (Christianity)

“Give me your tired, your poor, Your huddled masses yearning to breathe free, The wretched refuse of your teeming shore. Send these, the homeless, tempest-tossed to me, I lift my lamp beside the golden door!” Emma Lazarus

“In the past, America was welcoming the people in needs. Nowadays, it’s getting the other way around, with America closing the doors to people, especially because of the increase of terrorism.”

“A leader who, when he sees miserable people living on the street, feels shocked and finds himself sobbing, unable to control his body as he grabs on to a utility pole for balance—such a leader will naturally develop.” Sun Myung Moon (160:197, May 12, 1969)

“No real chief can be happy in building his own palace while his people are in poverty.”

“Living for the self ends with the self, but living for others continues forever. Therefore, for goodness to continue, you should live for your counterpart—the greater whole. This is particularly the case when you are in a position of leadership. Hence, anyone who aspires to become a world-level figure should live for the sake of the world. If he practices this, he may even become a world leader. On the other hand, a world leader who tramples upon those beneath him cannot remain. A world leader should be a leader who lights up the world.” Sun Myung Moon (57:63, May 28, 1972)

“As a leader, we shouldn’t trample on others but support them.”

“Today, the industrialized North must reach out to help liberate the South from pervasive impoverishment. The developed nations must lend a helping hand to the
support the development of the developing countries and the new democracies. Each nation’s attitude must be changed from a selfish one to an unselfish one. That in itself will be a revolution. Nations can do this when their leaders think of themselves in the role of parents. From that perspective, nations will regard each other as brother and sister nations. Then a fresh new vision will emerge and new opportunities will open up before of us.” Sun Myung Moon (219:120, August 28, 1991)