The program started with a few songs, an original song from Nathalie Komagata called “Truth Illusion”, and a round of introductions. The presentation was given in French and English by Chantal and Johnson. First presentation was about the Principle of Creation. Johnson explained that dual characteristics can represent the relationship between men and women, being complimentary one another, and there is a give and take action within the relationship.

There was a discussion about the Three Great Blessings of being fruitful, multiplying and having dominion over the earth. Chantal said, “This is what God wants us to accomplish and we can only do so on earth.” To be truly happy, we need unity between our mind and body and a constant maturity of character. This will allow us to feel closer to Heavenly Parent.

There are examples of people who have claimed some amount of peace and love like Mother Theresa and Martin Luther King Jr. They had their shortcomings but showed the world examples of peace by living for the sake of others. When living for the sake of others, it makes people feel more responsible and have a sense of integrity. Georg Pace, from Malta, gave a quote from Francis of Assis “For it is in giving that we receive.”

The topic of Peace and Happiness of the Family was also brought up among the group. The presenters explained that God’s love is incarnated within the love of the husband and wife and passed on to the children. The family is the school of love and the base of social norms can be created within. The couple is the image of God because He possesses both masculine and feminine characteristics.

In the afternoon, the presentation moved on to the subject of how to love people. A participant mentioned a quote from John F. Kennedy, “Ask not what your country can do for you, but what you can do for your country.” You shouldn’t expect someone to do something in your place, but to take the initiative to be that someone and to make a difference. Later, a UPF video was shown about the goal of being an Ambassador for Peace (AFP) and how to spread peace and love. Then another video portrayed the course of Reverend Sun Myung Moon, written in his autobiography.

In the evening program, 16 participants attended the Ambassador for Peace meeting on “How to prevent urban migration?”. Good and bad points were shared. For example, urbanization allows a city to expand and become more industrialized offering available jobs to people. On the downside, people have to think about the possible problems of sustainability for the citizens and the resource management. Kim Luzubu, originally from Democratic Republic of Congo, shared about his project in his hometown village in the south of Congo. He and his family taught the villagers to cultivate their lands and to make a profit from the crops sold in the towns. The project was challenging to put in to place, but has become a great long-term contribution to the people living in the countryside. 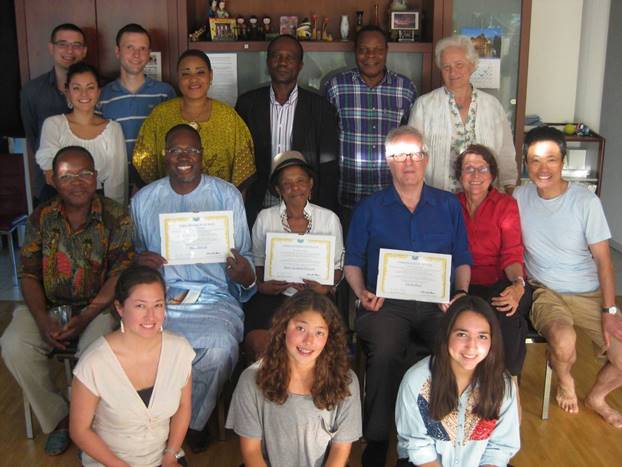 After the evening discussion, certificates were awarded to three Ambassadors for Peace: Male Dioum, Nono Gloriah Petlane and Georg Pace.