The launch of the “Interreligious Association for Peace and Development" 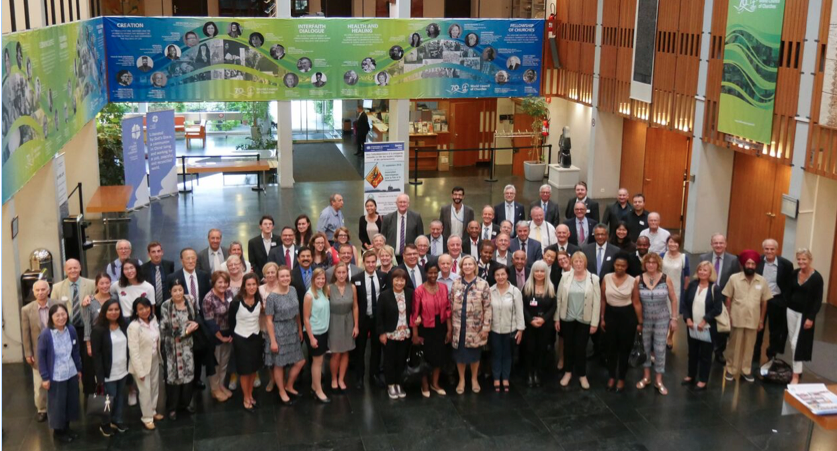 Toward Interdependence and Mutual Prosperity: "The Role of Religious Leaders and Parliamentarians” Ecumenical Center, Geneva, September 21, 2018

On September 21, 2018 the Universal Peace Federation (UPF) in close partnership with Women’s Federation for World Peace (WFWP), the Geneva Interfaith Intercultural Alliance (GIIA) and the Fribourg Peace Forum organized a conference at the prestigious Ecumenical Center of Geneva, to address the issue of cooperation of religious leaders and politicians as partners in creating a world of sustainable peace, prosperity and healthy human development. Pointing out the growing interdependence of a more and more globalized world, such a conference seemed to be a very timely subject.

Some of the key stimulus for organizing event were, first the fact there has never been such a broad engagement for peace and the promotion of human dignity, furthermore the peace and security domain that used to be exclusively in the hands of political leaders only is now understood to need the voices of all those who deeply care about peace, especially those of religious leaders who have a special role and responsibility to fulfill and finally the year 2018, marking the 70th anniversary of the Universal Declaration of Human Rights (UDHR). 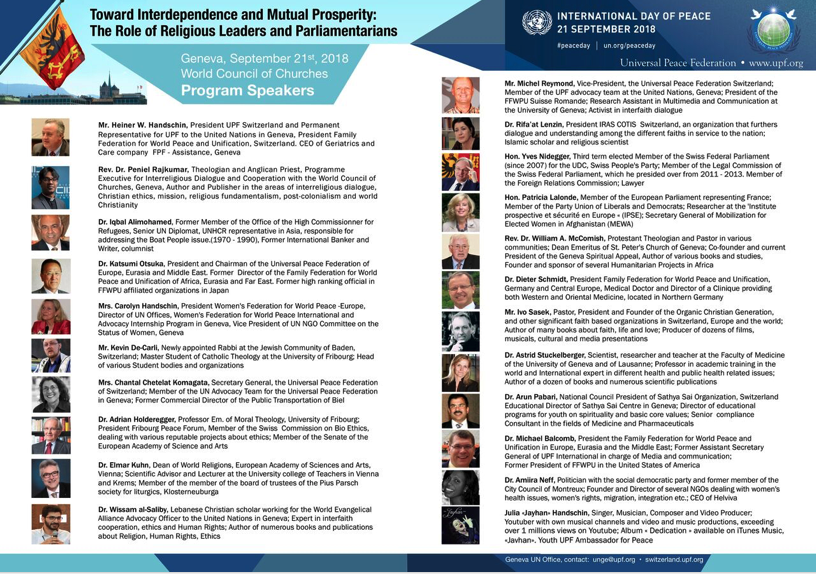 Geneva, Switzerland, as a place with a significant history regarding the relationship between the religious and political spheres, was chosen for this conference based on the enthusiastic response of the participants at a formal consultation that took place at the World Council of Churches on May 31st, 2018. At that occasion it was decided to prepare for a full day conference on the 37th International Day of Peace (IDP, September 21, 2018) and then in consensus, launch the Geneva/Swiss Chapter of IAPD.

At the Opening session the President of UPF Switzerland, Mr. Heiner Handschin, welcomed everyone in the name of the organizers, reminding the audience that on this 37th International Day of Peace, we could equally celebrate the 70 years of the Universal Declaration of Human Rights as well as the 70 years of the World Council of Churches. He emphasized that today’s event will be remembered as another landmark through the launching of the Geneva/Swiss chapter of IAPD. He offered a few thoughts about the importance of Geneva in the world and leading to the theme of the conference, he introduced briefly the panelists of the opening session.

As the first opening speaker, Dr. Katsumi Otsuka, President of UPF Europe, Middle East and Eurasia presented his welcoming remarks, emphasizing to what extent the location for this conference was important and as well as the unique conference facilities of the World Council of Churches. Dr. Peniel Jesudason Rufus Rajkumar, Anglican cleric and theological scholar, as well as Executive Director of WCC’s program for interreligious dialogue and co-operation was the next speaker. He extended the greetings and best wishes of WCC’s General Secretary, the Rev. Dr. Olaf Fykse Tveit, to the audience and addressed the issue of the need for greater interreligious harmony in order to tackle the key issues of the current world.

As the final speaker of the Opening panel, Dr. Iqbal Alimohamed, a former senior UN diplomat serving at the Office of the High Commissioner for Refugees during the 70 and 80. He presented a short report about his recent attendance of the UPF Summit in South Korea related to the IAPD and encouraged IAPD Geneva to set up the specific strategic goals and objectives, coupled with action plans, and a review process that would allow us to check how the objectives are being met, so that the new organization will indeed be able to make a difference.

Session I: The Role of Religion in Protecting Human Rights and Dignity – Towards an Interreligious Council at the United Nations

Building on a series of 9 Model UN Interfaith Youth Council conferences in cooperation with the Geneva Interfaith Intercultural Alliance, this session featured a debate among Youth representatives of major religions. The Interfaith Council Secretariat was taken on by Ms. Carolyn Handschin, President of Women’s Federation for World Peace Europe and Project Coordinator. She gave an overview of the Project, tracing back to a proposal by the UPF Founder, Dr. Sun Myung Moon, in 2000 at the UN in New York to create high level Interreligious Council at the heart of the United Nations. It seemed very fitting to have this meeting today at the World Council of Churches, a religious body whose origins interfaced with the early United Nations. Mrs. Handschin introduced the President of the Council, the newly appointed Rabbi Kevin De-Carli, the spiritual leader of the Jewish community of Baden. As he skillfully and with compassion led the debate, each of the 7 delegates was asked to give their perspectives in a short 5-minute statement representing the views of their faith on the session theme, “Interfaith Cooperation and the Protection of Human Rights and Dignity – A Vision for an Interreligious Council at the United Nations”. Their insights, conviction and solidarity lent persuasive argument to what extent such a council could help to solve some of the problems in our current world. 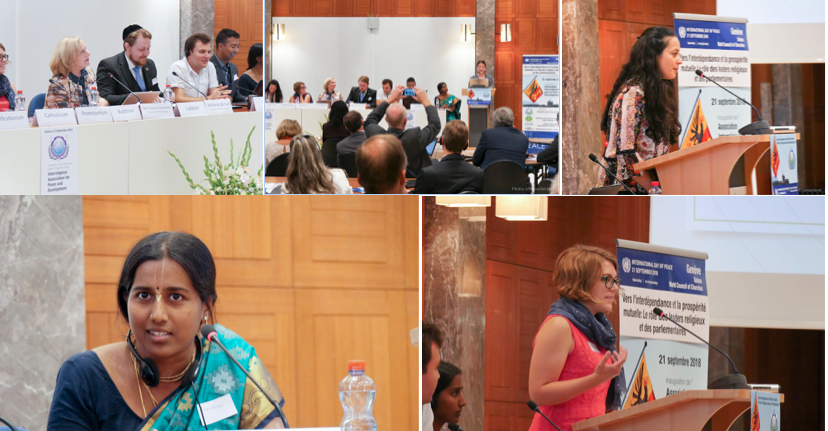 The session Chair, Ms. Chantal Chételat Komagata, Secretary General of UPF Switzerland, opened the session by introducing key goals for the panel as to provide capacity-building tools and proposals to engage stakeholders. As the first speaker, she introduced Dr. Adrian Holderegger, Prof. Em. of Moral Theology and Ethics at the University of Fribourg. He is also President of the Fribourg Peace Forum, a Fribourg based think tank and co-sponsor of the conference. Dr. Holderegger presented an academic approach to the topic by asking questions like: “Are religions dangerous?” elaborating first on the conflict potential of religions. In second part he showed the unique potential of religions for peace building, by offering reconciliation and healing.

As the 2nd speaker, Dr. Elmar Kuhn, Dean of World’s Religions at the European Academy of Science and Arts, reminded the audience that there is truly a great potential in all religions for peace building. However the important thing is the difference between theory and practice.

The last speaker in the session was Mr. Wissam Al-Saliby, who grew up in a post-conflict Lebanon, in an un-healed society where the historical and political narratives of the various communities continued to compete. His firsthand account emphasized the need for mutual understanding and better listening to each other.

The session was chaired by Mr. Michel Reymond, Vice-President of the Universal Peace Federation of Switzerland. He first introduced the session topic to find lasting solutions to critical challenges of our time involving both skillful politicians as well as open minded religious leaders.

Mr. Reymond then extended greetings to all participants and excused the Hon. Yves Nidegger who couldn’t participate due to sudden pressing activities in the Swiss Federal Parliament. He first introduced Dr. Rifa’at Lenzin, President IRAS COTIS, Switzerland who gave an overview over her work of integration with her organization in an increasingly multi-religious and multi-cultural environment. As a female Muslim scholar, she showed a great awareness of the challenges between religious concepts and political pragmatism. The next speaker was the Hon. Patricia Lalonde, a member of the European Parliament since 2017 representing the Group Alliance of Liberals and Democrats of Europe. She came to Geneva especially to demonstrate her support of the efforts of civil society. Her input was a strong encouragement of civil society- and religious leaders, to take more influence in public affairs, even like she herself took public office recently with the motivation to help solve issues and effectively contribute to solutions in trouble spots like Yemen, Libya, Syria and Afghanistan.

As the last speaker of the session, Rev. Dr. William A. Mc Comish, Dean Emeritus of the Geneva St. Peter’s Cathedral and President of the Geneva Spiritual Appeal, indicated that it shouldn’t be forgotten that democracy had its roots in Christianity and that church and state are both vital partners that need to continue working together, as the Geneva example seemed to show.

Session IV: Interreligious Cooperation as a Major Factor for Sustainable Peace in the World.

The 4th session of the conference encouraged faith based organizations to cooperate beyond national, religious and political affiliations to develop comprehensive strategies for peace and development.

The session chair, Dr. Dieter Schmidt, Medical Doctor and President of the Family Federation for World Peace and Unification in Central Europe, introduced the first speaker Mr. Ivo Sasek, Pastor, Founder and President of the Organic Christian Generation. Mr. Sasek gave a compelling discourse about some observations in nature that reflect the harmonious cooperation, according to the “swarm intelligence” prevalent in all facets of our natural universe. He stated that we should learn and follow the natural example in order to create sustainable peace and harmony in the world. Dr. Astrid Stuckelberger, Professor and UNIGE and UNIL, researcher and public health expert, emphasized that interreligious cooperation was the neglected reality of the United Nations development goals (MDGs and SDGs). She concluded that the trend is irrefutable; there is an absolute need for bringing religion, faiths and spirituality into global policy.

Dr. Arun Pabari, President of the National council of Sathya Sa Organization in Switzerland stated that in his work of values education with children, the results emphasize the need for input of religions and faiths. Sustainable peace begins with children learning peace in their daily life. The final speaker, Rabbi Kevin De-Carli of the Jewish community of Baden, showed the tragedy of interreligious dialogue leading to interreligious conflicts. He emphasized the great need for new role models for better mutual understanding of each other and our undeniable interdependence, so as to allow a true and responsible interreligious cooperation for the sake of sustainable peace and human development.

Session V: Closing Session and Launching of IAPD in Geneva.

The closing session was chaired by Ms. Carolyn Handschin, President of Women’s Federation for World Peace Europe and Director for the Offices of UN relations worldwide. She asked the four speakers to offer some final remarks, suggestions for the way forward, as well as concrete action steps.

The first speaker Dr. Michael Balcomb, President of FFWPU Europe, Eurasia and Middle East conveyed the vision and the greetings of the founder of IAPD, Dr. Hak Ja Han Moon, emphasizing the very important location in Geneva as one of the historical centers of Christianity and home of the Offices of the World Council of Churches.

Dr. Amiira Neff, social activist and former member the city council of Montreux, testified to the difficulty of a Swiss with a multicultural background and the need for IAPD as a means to go beyond any bias related to religious-, racial- and political affiliation.

In the following, Dr. Elmar Kuhn of the European Academy of Science and Arts expressed his vision and hope for IAPD to trigger a learning process in order to respect and tolerate the other, for cooperation and empathy of the religious denominations in Europe. He especially expressed his hope for the Geneva/Swiss Chapter to become a beacon of light for a world in need of lasting peace, based on the interaction with various international organizations, the UN, the Human Rights Council etc.

Finally the President of UPF Switzerland, Mr. Heiner Handschin, presented the Declaration for the launching of IAPD in Geneva and encouraged all to become an active member of IAPD by signing on to the newly launched initiative. He suggested as first action steps to find an office, launch a website and expand connections with various local and international partners.

After some musical presentations offered by Jayhan, Julia Handschin, a singer, composer and you-tuber, the final session came to a close and the participants were invited to share a dinner cocktail at the WCC Restaurant paired with lively networking and exchanges.

Group Photo at the end of the event. 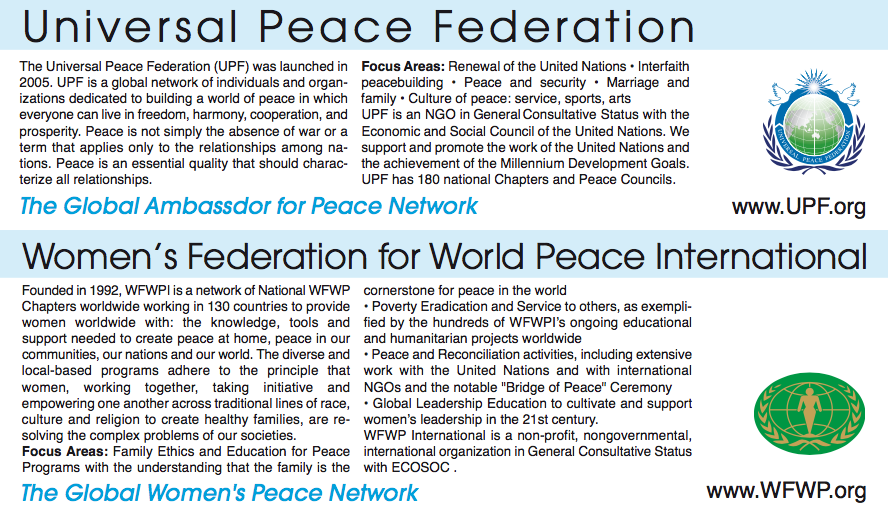 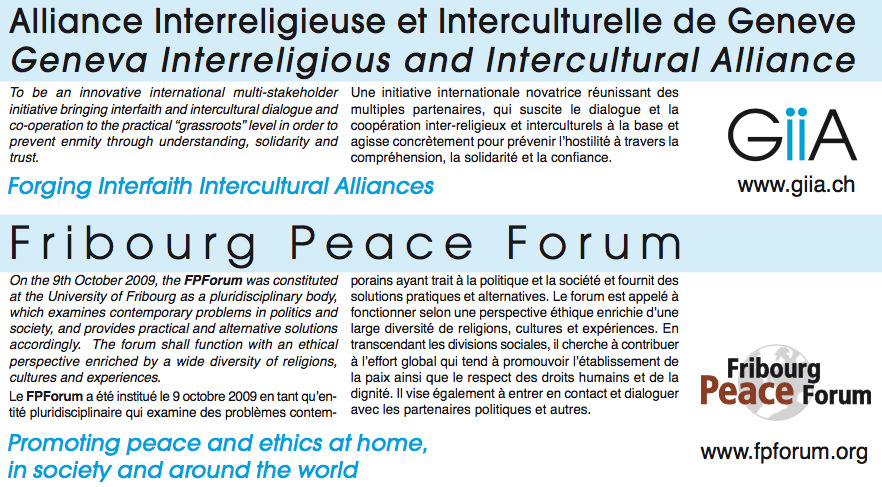 (Detailed presentations and recordings will be published on the respective websites!